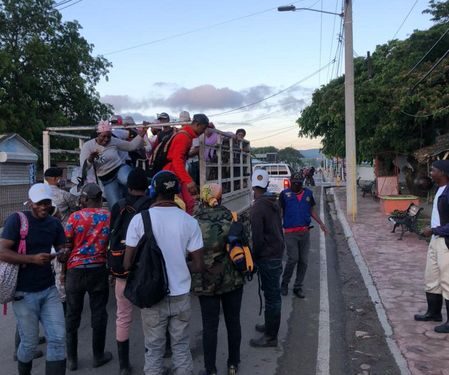 Members of the interdiction team of the General Directorate of Migration (DGM) intervened in the La Canela sector and other communities of the municipality where 134 people of Haitian nationality with irregular migratory status were detained to be in the country.

The interdictors, assisting the general director of the DGM Enrique García, entered with a military contingent headed by the deputy director general of that portfolio based in the northern zone Santiago Dionisio Cruz and members of the army and the navy, in the communities la Canela, El Batey, Platanal, la Capilla, Hato del Yaque and Barrio Nuevo, where 72 were detained, of which 60 were men and 12 were women.

While another group of 62 of these foreigners was also detained, 19 female, 6 children and 37 male. The children came in transit with their mothers. All were taken back to their country of origin in institution buses and returned across the border in Dajabòn.

During the operations, a minibus and three motorcycles were also occupied in this area. While in the municipality of Jarabacoa, La Vega province, another public transport minibus was also occupied with 12 undocumented foreigners on board, who were redirected to their country of origin.