The DGM reports more than 9 thousand foreigners were deported and not admitted in September. 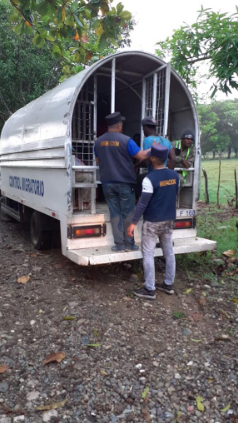 Foreigners   deported and not admitted were from five countries.

The General Directorate of Migration (DGM) reported that during the month of September 9 thousand 014 foreigners were deported and not admitted , who were in an irregular situation in the Dominican Republic or did not meet the requirements established in Law 285-04 .

According to a DGM report , of the 9,014 foreigners, 6,785, from Cuba, the United States, Haiti, Peru and Venezuela,  were deported, while 2,229 were not admitted while trying to enter the country by air, land and sea.

Foreigners with irregular immigration status were detained during dozens of immigration interdiction operations carried out during the last weeks throughout the country, at the disposal of the Director General of the institution, Lieutenant General ® ERD, Máximo William Muñoz Delgado.

Around the migratory movements through national airports, the institution’s report registered 400,448 entries and 455,079 departures during the same month , being the Punta Cana International Airport in the province of La Altagracia, the air terminal that concentrated the largest number of passengers, followed by Las Américas airports in Santo Domingo, Cibao in Santiago, Gregorio Luperón in Puerto Plata, La Romana , Joaquín Balaguer in Santo Domingo, El Catey de Samaná and María Montés in Barahona.

Regarding migratory movements along the land border , the institution    reported that in the same period 18, 486 entries and 14,431 exits were registered , mainly through the Jimaní border crossing , where the highest flow was reported, followed by Dajabón, Elías Piña and Pedernales.

With regard to the seaway , the statistical data indicate the registration of 61,006 entries and 61,328 departures , with the highest concentration in the tourist ports of Maimon in Puerto Plata and La Romana , which are the most visited by the transit of cruise ships.

The DGM also indicates that during the said month, the reception of 334 Dominicans was recorded after serving a sentence for various crimes in 15 countries, as well as  the voluntary return of 103 foreigners. Similarly, the statistical report indicated the issuance of 2,604 residences of different categories to people from 69 countries .