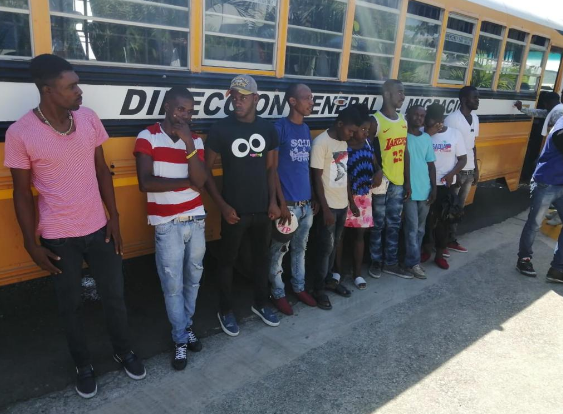 SANTO DOMINGO.- The provinces Santo Domingo, Valverde and the   National District were the demarcations with the highest number of   undocumented detainees detained by the General Directorate of Migration (DGM), during migratory interdiction operations carried out from September 23 to 27 of this year.

The information disclosed by the DGM indicates that 244 Haitian nationals were arrested in the province of Santo Domingo (East, North and West municipalities); 124 in Valverde and 122 in the National District. Followed by Puerto Plata, with 115; Santiago de los Caballeros, with 103; Montecristi and La Altagracia, with 89 each; 83 in La Vega; 77 in Azua and 48 in Maria Trinidad Sánchez.

In a press release, the institution reported that during the period it arrested 1,393 Haitian nationals, of which 895 were deported to their country by the border points of   Dajabón and Elías Piña.

The operations were carried out by immigration inspectors and members of the Army, Navy and Air Force of the Dominican Republic; from the police

National, CESTUR, representatives of the Public Ministry and the Ministry of Environment and Natural Resources.

The DGM warns that it will maintain the migratory interdiction operations throughout the national territory to counteract illegal immigration, as well as stop for deportation purposes to undocumented Haitian nationals, respecting the dignity and human rights of people.