The General Directorate of Migration detained and deported 5,252 illegal Haitian nationals in the last eight days after simultaneous operations 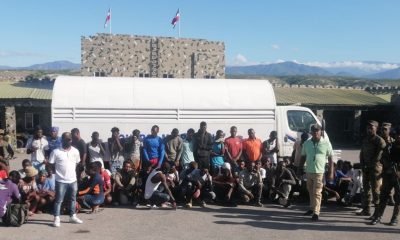 Santo Domingo, DR. – The General Directorate of Migration (DGM), reported the detention of 4,966 nationals
illegal Haitians in the country, in the last eight days, during simultaneous operations carried out at different points
of the national geography.

During the Migratory Interdiction operations carried out in Villa Mella, 550 Haitians were intercepted in
irregular migratory conditions, among them 529 male and 21 female, in the Buena Vista I and II sectors,
Los Marañones I and II, Avenida Jacobo Maljuta, Residencial Bienaventuranzas, Residencial San Rafael, Mama
Tingó and Sabana Perdida, among others.

In the National District, 238 illegal Haitians were detained, in the municipality of Santo Domingo Este, the raids
They were carried out on Avenida Venezuela, Sabana Larga, Ensanche Ozama and Villa Duarte, arresting 506
illegal Haitians, while in West Santo Domingo, 483 were arrested, in the Las Caobas, El
Enriquillo, El Olguin, Libertador and Buenos Aires, who at the time of their arrest were not carrying any
of documentation that accredits them as legal foreigners in the Dominican Republic.

Likewise, in the city of Santiago, 1,183 undocumented Haitian nationals were interdicted, of which
1,031 are men and 152 women, detained in the Ciruelito, Cien Fuegos, Monte Rico, Ensanche Mella sectors
I, City Center, among others, as well as the city of La Vega, Dajabón, Elías Piña, Jimaní, Pedernales and Azua,
where 2,288 men and women were arrested, in addition to the Jicomé interagency check-up, where
In addition, three motorcycles were seized without documentation.

The General Directorate of Migration specified through a press release that the operations were carried out
simultaneously from October 17 to 24, in order to counteract the movement of illegal aliens
in the country and enforce the law, actions that will continue to be carried out routinely throughout the country,
he explained.

In this sense, the General Director of Migration, Venancio Alcántara, indicated that the actions will continue
being carried out throughout the country, in order to restrict the entry into the national territory of illegal migrants, and prevent
unscrupulous individuals with judicial records intend to alter the peace and tranquility on Dominican soil.

He warned that the Immigration agents have precise instructions and faithful compliance, to enforce the
Law 285-04, within the framework of respect for international agreements, the guarantee of human rights, and under the
climate of legality provided by the regulations.