THE MAP APPROVES COMMITMENT LETTER FROM THE GENERAL DIRECTORATE OF MIGRATION. 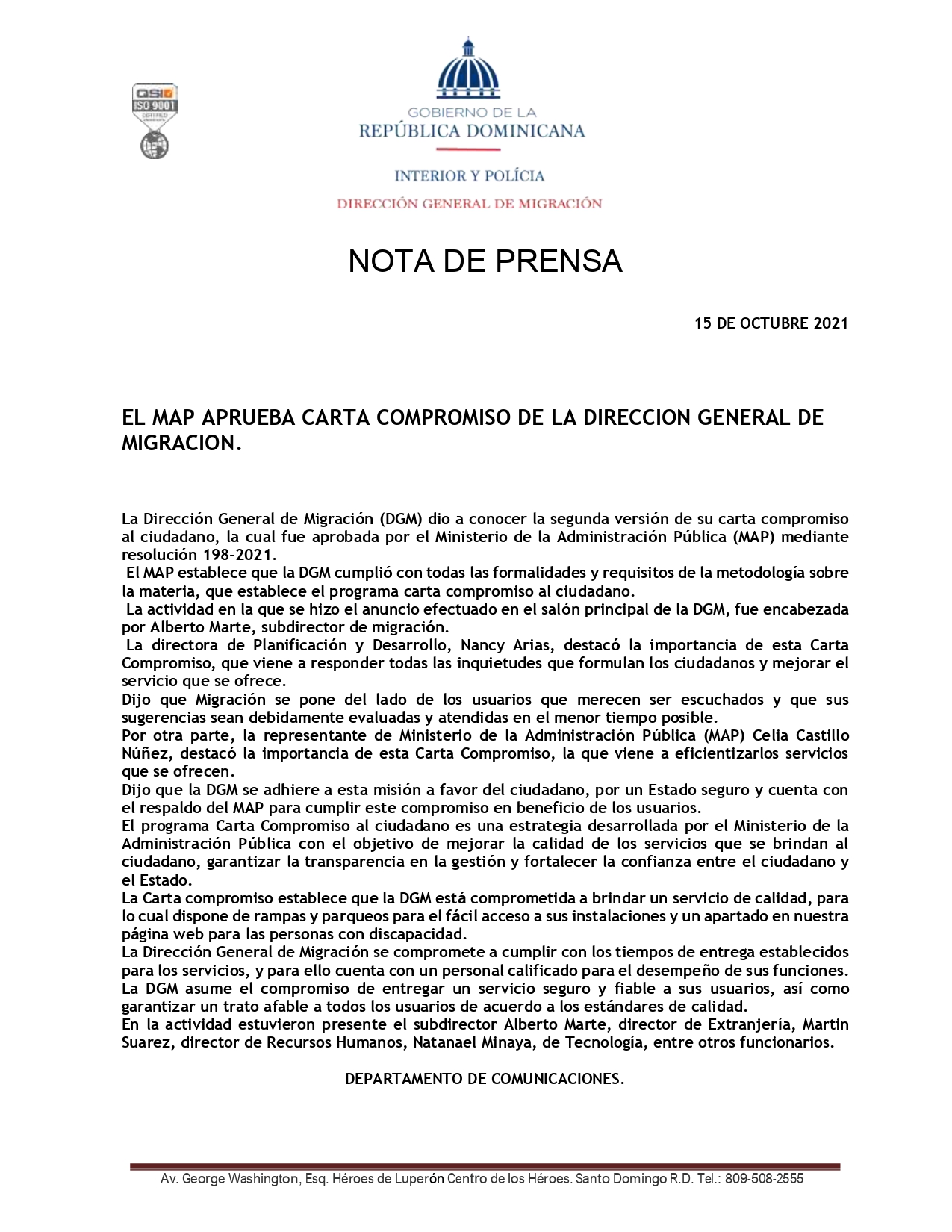 The General Directorate of Migration (DGM) released the second version of its letter of commitment to the citizen, which was approved by the Ministry of Public Administration (MAP) through resolution 198-2021.

The MAP establishes that the DGM complied with all the formalities and requirements of the methodology on the matter, which establishes the citizen commitment letter program.

The activity in which the announcement was made, made in the main hall of the DGM, was headed by Alberto Marte, deputy director of migration.

The Director of Planning and Development, Nancy Arias, highlighted the importance of this Letter Commitment, which comes to answer all the concerns raised by citizens and improve the service offered. He said that Migration stands on the side of users who deserve to be heard and that their suggestions are duly evaluated and attended to in the shortest possible time.

On the other hand, the representative of the Ministry of Public Administration (MAP) Celia Castillo Núñez highlighted the importance of this Letter of Commitment, which makes services more efficient that are offered.

He said that the DGM adheres to this mission in favor of the citizen, for a safe State and has MAP’s support to fulfill this commitment for the benefit of users.

The Citizen Commitment Letter program is a strategy developed by the Ministry of thePublic Administration with the aim of improving the quality of the services provided to the citizen, guarantee transparency in management and strengthen trust between the citizen and the state.

The Commitment Letter establishes that the DGM is committed to providing a quality service, in order to which has ramps and parking for easy access to its facilities and a section in our website for people with disabilities.

The General Directorate of Migration undertakes to comply with the established delivery times for services, and for this it has a qualified staff for the performance of its functions.

The DGM assumes the commitment to deliver a safe and reliable service to its users, as well as guarantee a friendly treatment to all users according to quality standards.

The activity was attended by the deputy director Alberto Marte, director of Immigration, Martin Suarez, Director of Human Resources, Natanael Minaya, of Technology, among other officials.